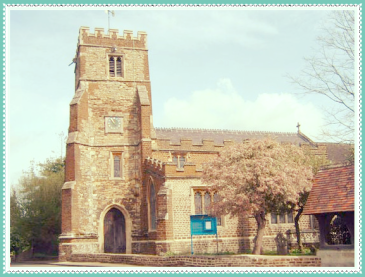 There was probably a church in Aspley before the Norman Conquest because the dedication to St Botolph suggests an Anglo-Saxon foundation.

The cult of St Botolph, a seventh century Anglo-Saxon scholar and abbot was almost entirely confined to the Eastern counties and may have been brought to Aspley by emigrants fleeing the Danish invasions. The earliest document relating to Aspley is a charter dated 969 granting a piece of land at 'Aepslea' to Alfwold a kinsman of King Edgar.  It is possible that the church originated as a private chapel for Alfwold and his successors.

There was certainly a church by 1223, when it is mentioned in the records of the diocese.  By some erratic fortunes of local lords of the manor, involving conviction, exile, a fourth marriage etc, we reach Anselm de Guise in 1259 and from the time when a second Anselm de Guise held the property in 1375 the manor became known as Aspley Guise.

So what we can see now from the outside is a substantial Perpendicular tower although restored in Victorian times, and while we're about it a clock which dates from somewhere between 1400 and 1650. It required winding once a day every day until 1980.  The tower houses a set of six bells.

The oldest monuments date from this time, that is around the end of the fourteenth century. The tomb effigy in the North aisle is thought to be Sir William Tyrington who was a guardian to the second Anselm de Guise and died in 1400.  It bears his arms and has a nice lion resting at his feet.  As often in English parish churches there are brasses.  St Botolph's has two, the first in memory of John Danvers, the Rector between 1395 and 1414 which shows a priest and St John the Baptist.

Some guide books think these may have been figures from either side of a cross as part of a bigger brass.  That would explain why they are facing each other in this way.  They are quite small - only about 18" high. The second brass commemorates Sir John de Guise who died in 1501. That is rather larger and more complete.

The oldest woodwork in the church is a screen surrounding part of the North aisle, which has tracery and a cornice with a pattern rather like battlements, and this dates from the fifteenth century.  The pulpit contains some excellent carving, but, rather than being something all of one piece, was made up out of seventeenth century panels of carving from the Netherlands which are held together and framed by English work of the later seventeenth century.

It is worth looking at all four panels because the carving is of a very high quality.  It was probably created as part of the nineteenth century renovations.

The "de Guise" family exchanged the manor of Aspley with Henry VIII for estates in Gloucestershire in 1540, and that is the last we hear of them in connection with Aspley Guise.  Elizabeth I sold it to a Sir Richard Lee, a military engineer, and from him it passed to the Sadleir family until 1810.

The village seems to have prospered in the mediaeval period, but suffered from famine and flood in the early fourteenth century and remained of little consequence for the next two hundred years.  However in the sixteenth century substantial houses began to be built, of which The Old House of 1575 is a good example. By the eighteenth century this house was lived in by the How family who were Quakers and the parish records show that their relationship with the Church was surprisingly rather stormy.

In 1735 the churchwardens accused Thomas How of not paying rates and he in his turn accused them of fraud and mismanagement of the accounts.  On this occasion How seems to have won, when the case came up at Bedford court.

But by 1770 a successor Richard How was in dispute, this time backed by the churchwardens,  with a young upstart newcomer Francis Moore of Moore Place, which some of you may have seen more closely since it is now a hotel and restaurant. This time the case related to a "packed" vestry meeting when Mr Moore had provided his party with dinner and punch, rather than the usual beer.  Perhaps the present use of the house is not surprising!

We come back to the Church because it is the grandson of Francis Moore (John Vaux Moore) who later became the Rector and in the middle of the nineteenth century undertook very extensive and no doubt expensive repairs to the fabric of the church. As with many other churches at this time, so much was added that the inside of the church might strike the casual visitor as almost wholly Victorian, certainly John Vaux Moore's memorial is in the high Victorian style.

A further major restoration took place from 1890 onwards and as part of this work a very fine Nativity window was put into the South aisle. By this time we may deduce that Aspley Guise had taken on the prosperous and somewhat privileged nature it still enjoys today. There is little that needs doing structurally within the church itself, but within the past 15 years a new Community Link Room has been built and that will be recorded as another building project when historians of the future come to look back on the next stage of St Botolph's history.

In the meantime, decorative work still continues and, as you can see from the kneelers the Church of St Botolph, Aspley Guise is still an object of affection to its parishioners.

Come and Join Us

Print | Sitemap
Copyright St Botolphs Church, Aspley Guise. Not to be reproduced in whole or part without permission.